Kitchen Combat is now "Thanksgiving Safety Central." We're dedicating this November to twice-weekly posts about how to avoid horrible Thanksgiving fried turkey disasters. Don't worry, we haven't become a namby pamby safety site, we're also including some extreme examples of what NOT to do.

Frying turkeys is one way to get some delicious dark meat, but it comes with some dangers. Improperly done, the turkey won't be the only thing that's fried. To get an idea of how badly this can go wrong, I present to you a comedy morning show's very serious demonstration: 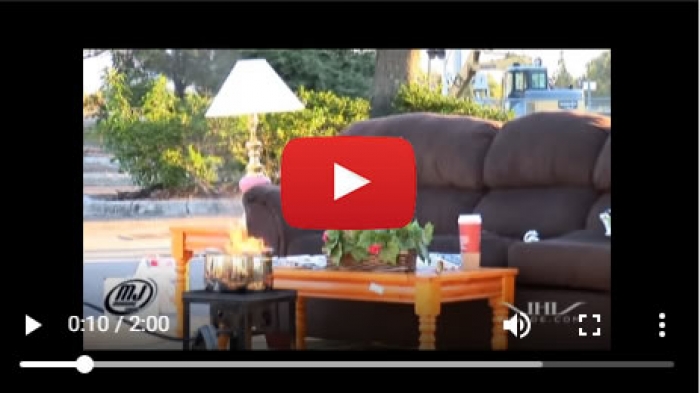 Remember when you complained when you had to learn geometry in high school? You can finally put Archimedes' Principle to use. You know, W=pVg. What, you don't know what that is? Now I bet you're wishing you weren't daydreaming about prom.

Here's the gist; when you put some stuff in some other stuff, you'd better make sure that there's enough room for both stuff in your container that holds the stuff. Otherwisegrease fire.

If that wasn't detailed enough for you, you can always make an accurate mathematical model of your turkey and the pot you are sticking it in with thishandy dandy calculator. Just remember to be accurate in the measurements of your turkey, the height of the body, density of the body, density of the liquid, and measuring range. You're hard work will be rewarded with knowing the draught, replaced volume, buoyant force, weight of body, and measured force.

Come back this Tuesday for a little more math: Oil + Water = Disaster

Ice Cream's
What did the ice cream say to the Hamilton Beach Commercial HMD mixers? "You shake me up"!! What do national chains, regional operators and local restaurants say about these same units?? "Powerful, easy to use, clean, and maintain, and unmatched dura ...
See more ...

Long Live The Nugget Nation!
Scotsman Ice: Join the Nugget Nation From Our Friends at SEFA and Scotsman-Ice Ice-chewing fanatics love nugget ice, The Original Chewable IceTM invented by Scotsman Ice Systems in 1981, and the company is celebrating with a new "Luv the NugTM" ...
See more ...

Time Saving Benefits of Doughpro
As a former employee at a pizza joint, I know that time is money. As a minimum-wage pizza pie producer, time did not equal very much money, but money nonetheless. However, for the owners of a pizza emporium, time used is money spent--not money earn ...
See more ...

What's Lurking In Your Thanksgiving Day Bird?
With the upcoming holiday season approaching, it is important to keep food safety in mind. No, not just in the context of wearing goggles when destroying things, but also when looking out for the creepy crawly germs. Holidays should be a fun time, ...
See more ...