Frying Up Some Fiery Fun

Last week we delved into the most basic of turkey frying rules, which is don't put too big of a turkey into too small of a pot. This week, we explore the physics involved with mixing water and oil.

While oil and water may not mix at lower temperatures, when they get beyond water's boiling point, it gets dangerous. Here is a video to help illustrate: 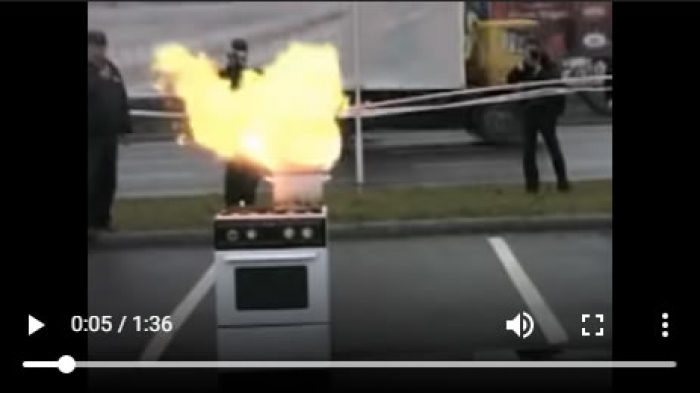 That's horrifying. Talk about kitchen combat; it looks like a bomb went off in that pot. So what causes this? Believe it or not, it has little to do with that oil-not-mixing-with-water phenomenon at lower temperatures. Steam is the answer.

When water becomes steam, it expands rapidly to about1700 timesits original volume. Because water boils at 212 F and you fry turkeys at around 350 F, any water that comes in contact with properly heated oil will become steam.

So how can you safely boil water, but not put water into hot oil? As you can see from the video, the oil is already on fire. However, it is fairly contained because the surface area is minimal. Remember that fire needs three things to burn, heat, fuel, and oxygen. We have heat and oxygen in spades, but the fuel source is limited to the surface area of the oil, which is ? r (where r is the radius of the pot.)

Because of the nature of two liquids mixing causes a large volume of the water to come in contact with the oil, a lot of steam is generated very quickly. When the water turns to steam and rapidly expands, it pushes much of the oil out of the pot. The many droplets of oil flying from the pot form a much greater surface area available to burn than before. Thus the fireball.

As a sidenote, you can safely boil water because a) it doesn't burn and b) the nature of boiling water in a pot (liquid to solid contact rather than liquid to liquid) causes only a small amount of water is convert to steam at a time .

What have we learned? DON'T put a grease or oil fire out with water. You will make things much worse for yourself. So what can you do? Invest in a Class B fire extinguisher, which typically contains carbon dioxide to keep oxygen from reaching the flame. Barring that, you can pour baking soda on small grease fires to extinguish them. Most of all, when frying up a turkey, make sure it isn't frozen (as frozen turkeys contain a lot of water that will evaporate and otherwise run off when thawed), get a thermometer to make sure your oil is the correct temperature, go slow, and exercise common sense.

Thanksgiving is just around the corner, so if you don't have a thermometer yet, feel free to support our sponsor and get one throughRestaurant Equipment Worlds siteFood Safety World. If you need a good pot to fry your turkey in this year, check outPot Pan World, too. Thanks for your time, and I hope we've enlightened you on how to avoid the need to combat your own kitchen.

Frying a Thanksgiving Turkey: Stay Out of the Kitchen
You've got several gallons of hot oil and an open flame.Your kids may all have hangovers. I mean, it should be common sense that frying a turkey is something you would want to dooutside. However, the lure of warmer climes and the draw of being aroun ...
See more ...

Delicious Korean BBQ Taco Box Goodness
Ok, so I admit it... We're a little late to the game. The Orlando Food Truck craze has been going on for quite some time now and we're just starting to notice. As the member of REW's web-development team who keeps us connected with social media ...
See more ...

Trick or Treat Bread
This October REW wanted to do something inspired by the season, fun to eat and make. Our hearts immediately went to bacon and pumpkin. As with many great inventions what we envisioned was not quite our final result. Our result may not be completely o ...
See more ...

Hot Cider vs Hot Chocolate
The leaves are turning and winter winds are begining to howl. Jackets and flannel PJ's are brought out of storage and mothballs are thrown out. The temptation to stay home and curl-up on the sofa with a mug of something hot and steamy and watch carto ...
See more ...