Frying a Thanksgiving Turkey: Stay Out of the Kitchen

You've got several gallons of hot oil and an open flame.Your kids may all have hangovers. I mean, it should be common sense that frying a turkey is something you would want to dooutside. However, the lure of warmer climes and the draw of being around family (for some people) may make one want to just get it over with and do it indoors. And people do.

This little fact probably is a factor in the jump in house fires on Thanksgiving, when a house fire is roughly twice as likely, according towww.bookofodds.com. According to theU.S. Fire Administration, $21 million dollars in fire damage occurs every Thanksgiving. So don't think that you will be the lucky one if you fry your turkey indoors; it happens.

Newsflash: you are more likely to burn your house down due to cooking on Thanksgiving than during the average day. That's not a huge surprise, so what is the takeaway here? 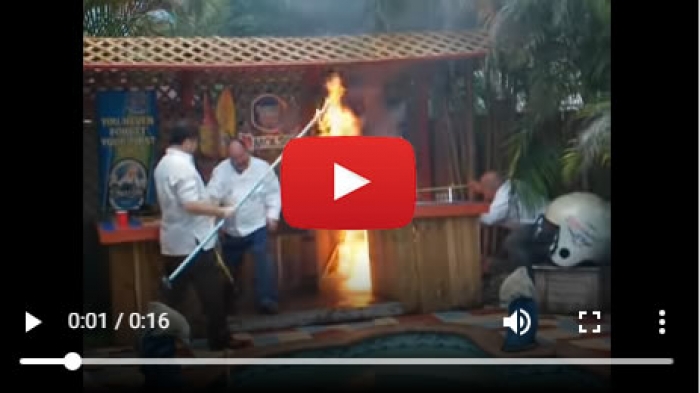 At least the guy semi-saved the broom! Look, the truth is, we all do stupid stuff sometimes, and as long as people keep burning down their houses on Thanksgiving due to a lack of information, we'll keep spreading the message. Keep your deep-frying out of the kitchen, please.

Is there any good news? On the day after Thanksgiving, the odds of a house fire being caused by cooking equipment significantly goes down. So, if you survive, eat those leftovers with a newly found sense of security.

We continue our walk down Safely Frying a Thanksgiving Turkey Lane next week with fire extinguisher science. Stay tuned!

Hot Cider vs Hot Chocolate
The leaves are turning and winter winds are begining to howl. Jackets and flannel PJ's are brought out of storage and mothballs are thrown out. The temptation to stay home and curl-up on the sofa with a mug of something hot and steamy and watch carto ...
See more ...

Frying Up Some Fiery Fun
Last week we delved into the most basic of turkey frying rules, which is don't put too big of a turkey into too small of a pot. This week, we explore the physics involved with mixing water and oil. While oil and water may not mix at lower temperatu ...
See more ...

Delicious Korean BBQ Taco Box Goodness
Ok, so I admit it... We're a little late to the game. The Orlando Food Truck craze has been going on for quite some time now and we're just starting to notice. As the member of REW's web-development team who keeps us connected with social media ...
See more ...

Trick or Treat Bread
This October REW wanted to do something inspired by the season, fun to eat and make. Our hearts immediately went to bacon and pumpkin. As with many great inventions what we envisioned was not quite our final result. Our result may not be completely o ...
See more ...